How to Impress a Scot

GenX chiming in. A pre-coffee divergent rant happened, so I posted it here.
current mood - Sidney Portier
Betty White
Ed Asner
Prince
Eartha Kitt
et al
(eyes got tired. after a bit. It might get edited later)
I love your attitude. My daughter would think all those adventures sound brilliant! I couldn't actually watch her try, but she's still a skateboarder.
Deep fried pizza? That menu sounds like something from a right-winger, state fair kiosk! That made my arteries twitch, but I'm useless at a buffet. Chinese buffet's hate / love me bc i'm just there for the banter and the crab legs. When I baked haggis in a dinner roll shell, I remembered Grandma's cooking back in Kansas City, MO, where Dad grew up. We typically resided outside anything like "Dodge" with all the shootouts and privateers and scoundrels running about, fighting for control over women who couldn't be more disgusted, or could. John Cleese cracks me up.
Ringo is my security blanket, story teller. Dad and I could sing "Me and My Arrow" for a hundred miles.
If you haven't seen "The Point" this is a good time.
I also love foreign languages. English, for instance.
There's this maternal Great Granny from Liverpool who married into the Bass Reeves crew 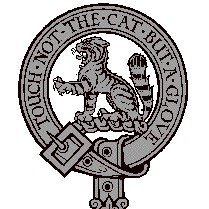 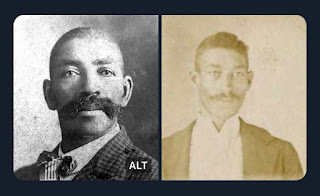 Bass Reeves / Great Grandfather J.W Ramsey
Since he was recruited by Cousin Ulysess, I suppose he got his clothes from the Celts.
Dad only drank to the silly, not the rip-roaring kind of drinker, but the way he watched a really good match was hilarious since he was a Space Race programmer. Daddy was mostly a beer and rum kind of guy who drank until he was loose enough to dance Reggae with an inflatable snowman around a bunch of other "Bob's" from around the DC Beltway.
(That's like half an M-5 motorway)
I wish so much I'd known the song, "Bully in the Alley in the 80s! We loved the Corries and grieved hard for Stan Rogers in 1983. Some of us had to chill since we have so much melanin now, (Mostly Nigerians and the Moors) but that would have been my last call theme song! A woman should know these things about her heritage. We look like the cast of Hamilton, had they been raised on real Angus. And I don't know who allowed Ted Lasso to talk like that in Kansas, but my mother would have had a Queen's English rant with much better posture than myself! I was basically born with a 3rd grade education, thanks to Mommy.
Dad called her "The Boss" bc she was his class president and looked like Eartha Kitt and played basketball in the late 40s.
Then I find out we are the actual groot. Grant in Dutch = groot
The states are going through another battle of the worthies, and ironically, that's what they called dad in his meetings, "WORTHY, Sir Robert, etc Grandad was a shriner, but not the kind who'd ride around in a fez on a tricycle since he was 6'1" and 4-F. He sat like Seargent Pepper, but his Zoot Suit was far more subtle. He was a very lean man. But when he yelled, "Mon Dieu et mon Driot" with his fist in the air, no kid dared dispute his
The Puerto Rican taverns around Chicago would have loved it! I'm so 80s, I played Prince covers when Funk got dissed by Go-Go! I used to be so good! I think every country needs a Paisley Park. Too bad that Russian bought Grant's castle. i really need to know what Granny's been going on about.
What's the scuttlebutt on that?
Ulysses was said to have been a kind of baby-man when he drank too much whiskey, so he didn't get drunk on the job like some apparently do. *cough* I was a heavy-handed mixer when people tipped me in drinks instead of money. I'd actually have people come back requesting more coke for their rum! Then I joined the Navy and watched kids learn how to hold their liquor. smdh, the pressure!
People-watching at the mall was a fun national pastime growing up. Funny how the fellas thought we were shopping for them.
Blackwells LOVE languages and I severely want to learn Scots and Gaelic. And since we excel behind cameras, being in front of them is not at all my thing. I lack symmetry and I was a high school sporto who never EVER wanted to be a guy. I had a great time tackling them tho.
Posted by Muzebl at 2:08 PM No comments:

Thank you for posting your request on History Hub!

Since Merchant Marine log books were required for vessels that traveled between Pacific and Atlantic ports, the logs must be submitted to the U.S. Coast Guard at the final port of the voyage. Therefore, we searched the Catalog for these logs and located the following series in the Records of the U.S. Coast Guard (Record Group 26):

Due to the COVID-19 pandemic and pursuant to guidance received from the Office of Management and Budget (OMB), NARA has adjusted its normal operations to balance the need of completing its mission-critical work while also adhering to the recommended social distancing for the safety of NARA staff. As a result of this re-prioritization of activities, you may experience a delay in receiving an initial acknowledgement as well as a substantive response to your reference request from RDT2, RE-AT, RW-SB, and RW-SE. We apologize for this inconvenience and appreciate your understanding and patience.

We hope this is helpful. Best of luck with your research!