Glasgow City Crest, for Provosts of Glasgow
Submitted by 1_becky13
Description From: https://glasgow.gov.uk/index.aspx?articleid=2998 Here is the bird that never flew Here is the tree that never grew Here is the bell that never rang Here is the fish that never swam. The City of Glasgow had no single official armorial bearings until the 19 th century. There were at least three official seals in use and a patent was granted by the Lord Lyon in 1866. The emblems had been used in various forms and can be traced back to the seals of the Bishop of Glasgow. The fish was the first to appear, on the seal of Bishop William Wyschard in 1270, to be joined by the bird in 1271, on the seal of Bishop Robert Wyschard. On a later seal of the prelate the tree, or at least a branch, is shown along with the fish and bird. The bell first appears in 1321 on the privy seal of the Chapter of Glasgow. The first seal on which all the emblems are represented together is that of the Chapter of Glasgow used from 1488-1540, but it was not until 1647 that they appeared in something like their present combination on a seal. There were several subsequent variations, the latest being in April 1996, when the present Lord Lyon granted a patent to the city following Local Government reorganisation.

Mungo Nutter Campbell, of Belvidere, and afterwards of Ballimore, Dean of Guild 1823, Provost 1824, born circa 1785, died 1862. (13) He was son of Alexander Campbell of Dallingburn, Collector of Customs at Port Glasgow. Collector Campbell was a cousin of John Campbell senior, to begin, and married his sister Elizabeth. Mungo Nutter Campbell, their son, married (as we have seen), first, his first cousin, Helen, daughter of his uncle and partner, John Campbell senior; second, a sister of his brother-in-law, Possil's wife, viz., Amelia MacLachlan, who was a daughter of Donald MacLachlan of MacLachlan, and Susanna Campbell of Park, and was, therefore, like her sister, Harriet, her husband's first cousin once removed. So that Mungo Nutter, besides being John Campbell senior's partner, was his nephew, and his cousin's son, and his son-in-law, and his niece's son-in-law, and his son's brother-in-law, which is abusing the liberty of the subject. To make some amends, his godfathers and godmothers (or some one for them) had equipped him at starting with kenspeckle agnomen, drawn from Miss Nutter, the wife of Uncle Mungo of Kailzie.

(13) Ballimore (who was a strong Tory), for some reason or other, at one keenly contested election for Argyll, refused to take part with either side. They said then he should have been called Mungo Neuter. 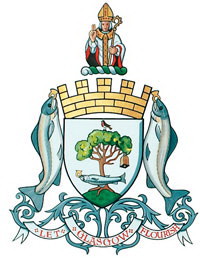