The Seals family has not endorsed this statement.
We have not discussed it.
But, I'm a BLACKWELL,
NOT some freakin' token MASCOT! 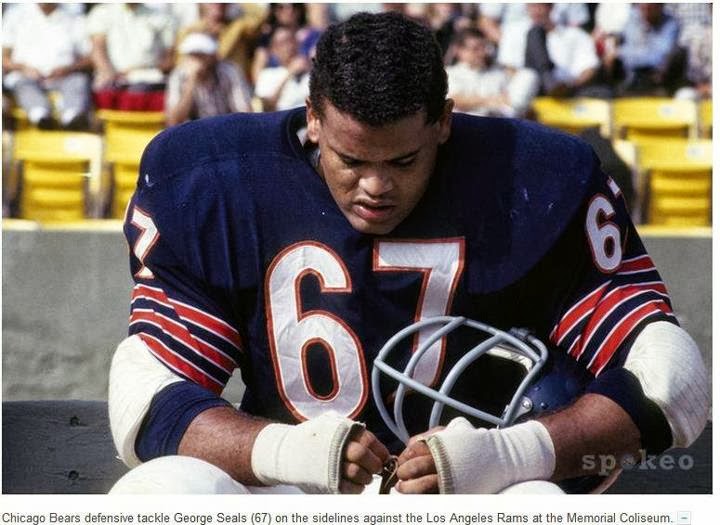 (my response to someone who reminded how long this mascot thing has been offensive)
If industry wants to lower the bar on the game and it’s meaning, I think people have a right to pull their endorsements….especially when they’ve lost that lovin’ feeling that earned them the right in the first place.
It’s one thing to be ignorant of the offensiveness.
It’s another to defend one’s aggressive ignorance in the matter, when it causes so much damage to the morale of the community.
(someone pointed to the year 1971)
That’s about when greed started destroying the sport and everything that was cool about it.  By ’71, Big George was married to a social worker and was teaching kids, “I AM Somebody” with Jessie Jackson.  After playing with the Chiefs, he became the first man of color to hold a seat on the Board of Trade.  Guys were into pork bellies, but he went in for soybean futures!  My hero!
His son jumped the gun, running for Congress in a red district with delusions of blue-hood, but you nailed a very interesting year.
ERA was ranting against objectifying cheerleaders.
Stay at home mothers weren’t valued since they didn’t bring a paycheck for their hard work in the home and the community.  But mostly turned into a battle of “My kid can beat up your kid”.
And don’t get me started on soap operas.
I was reading Erma Bombeck in elementary school to make up for what I was missing about motherhood and her place in the community.  I’d read everything the library, by high school.
Swiss bank accounts were where they stuffed money while the upper middle were getting taxed to blue-collar status like some kind of punishment for achieving the wage-gap we managed to squeeze from their grubby little hands.
Levittown=great equalizer (eyeroll)
The football mentality was in EVERYTHING!
I was the Buckingham-section bruiser…the only girl permitted to play a version of the game outlawed by the local police….and the PTA.  Oddly, my favorite sandbox buddy grew up to marry the Hawaiin version of me from HIS section.  K for Kenilworth, I think. It was built on top of a tobacco plantation, so…yeah, we knew all about MD’s history and what it meant for us to integrate it.  *snortle*
Oddly, we played it in a field across from the Sacred Heart rectory, just in case.
We had a lot of frustrations to work out.
I was trying very hard to be a good girl, long after it was a cool thing to do, but if any of the boys really thought about it, they could tell how I really felt about them by how I knocked them on their ass.  If I SACKED a guy, he was probably supposed to learn a lesson.
I hadn’t even met Big George back then, but the lineage was apparent.
I’ve worked far too hard to be any kind of liberal on many subjects, but if they want rights to a great American legacy just to sell pop, I don’t want to represent THAT.
Reality has a liberal bias!  That’s why I’m a raging moderate.
Had they changed the name LOOOONG ago, the attitude of the DC area would have changed tremendously.  Instead, they changed “The Washington Bullets” to WHAT?.
(facepalm)
The gun law arguments on THAT subject were NOT to be believed.
They completely dismissed the point!
Why were so many bullets flying?
Because human life had become THAT cheap/dismissible and greed was the evil behind it!
I can’t remember when the people ever got a thing from Congress that greed/fear-mongers didn’t demand their right to cash in on….the right to be wrong.
What is up with that anyway?
They still call not-round ball made of cowhide, “pigskin”.
I don’t need a passport to hear it ALL..
and take it with a laugh…
especially people who play and kill over REAL football.
I found it funny that Son of Flubber came on the other day because we discussed that flick all the way through high school!  It certainly applies.
Football used to embrace the spirit of greater pursuits…not the game itself.
The war on our cultures, was always on the intellect and the capacity to empower ourselves with it.
My perspective runs a bit deep on the subject.
http://pickyourselfaspot.tumblr.com/
Posted by Muzebl at 1:13 AM